Just after 11:00 AM on September 22nd, a group of eight of us left Tomhegan, Maine and headed to Baxter State Park via the Golden Road. The dust coming off the Northern Road was intense, making visibility for the last car in our three-car caravan with zero visibility. Once we finally got on the Golden Road, the road conditions got much better! We passed two incredible views of Mt. Katahdin during our drive as well as Ripogenus Dam & Gorge, Nesowadnehunk Falls, and Abol Bridge Campground. It was outstanding!

When we arrived at Baxter State Park, we stopped at the visitor's center, bought a map and changed our trail plans from up Cathedral down Saddle to up and down Saddle, per a ranger’s suggestion. We set up camp at Roaring Brook Campground and enjoyed appetizers of cheese, carrots, crackers, and hummus. I felt like a rockstar, popping up my new tent solo in just a few minutes. My mom once said, “camping is like riding a bike, once you’ve learned it, you don’t lose it!” I guess she was right! A few of us took off to dip into a nearby pond and ended up taking in an amazing sunset at the pristine Togue Pond. When we arrived, the sun was beating down on us, feeding our tired bodies with just the right amount of Vitamin D. When we returned to camp, we had a divine spread of steak tips, swordfish, summer squash and potatoes, all cooked over a beautiful campfire for dinner. A huge shout out to my amazing camping companions for bringing such a spread and graciously sharing with me! 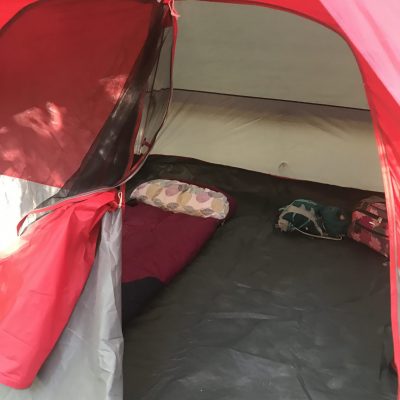 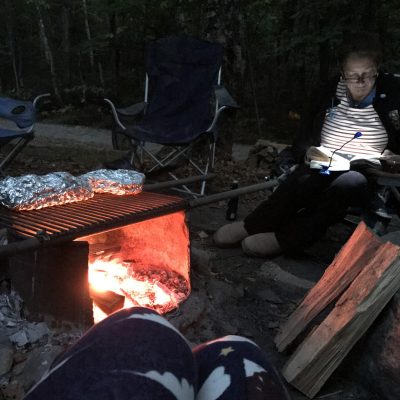 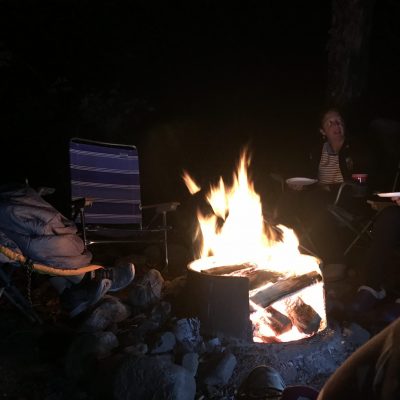 I woke early, a little after 5:00 AM on September 23rd to the sound of many hikers already taking to the trail. It was super chilly at 47°F, so I changed in my sleeping bag into wool socks, shorts with pants over them, a tank top, long-sleeve Columbia omni-heat shirt and jacket, my hat and gloves. Heading to the outhouse reminded me of so many childhood memories of camping for long stretches and loving the brisk cool mornings.

We quickly broke down camp and after a filling breakfast of  Maine made Good To-Go granola and hardboiled eggs, we signed the hiking register and took to the trail at 7:10 AM. Two of our eight-headed back home, leaving six of us to summit the highest mountain in Maine. We hiked a relatively easy 3.3 miles on Chimney Pond Trail, with several majestic wooden bridges, a pile of large boulders and some of the most beautiful red and purple leaves fall gifts us with. The weather, however, was far from fall as the sun rose and began to quickly warm our bodies, making us shed our jackets and pants for tank tops and shorts. The trail followed a stream for a while that filled my ears with the peaceful sounds of the wilderness. It wasn’t long before a dad and his son quickly hiked past us at a pace I could never imagine maintaining on an 11-mile round trip hike with a 4,288-foot elevation gain. I was inspired, excited and so proud of myself for taking on this challenge! 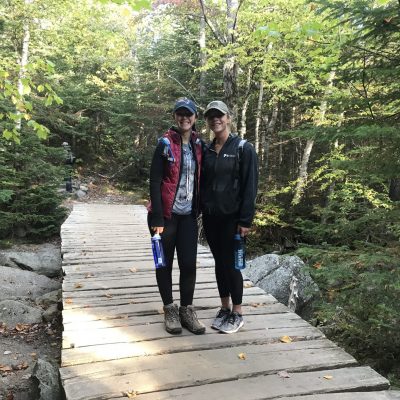 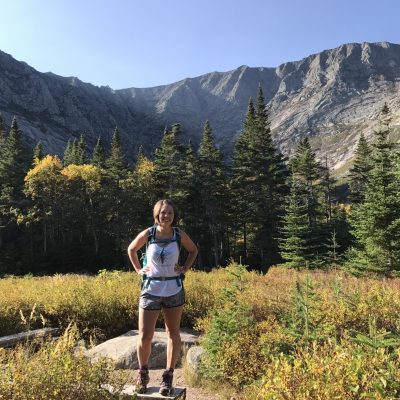 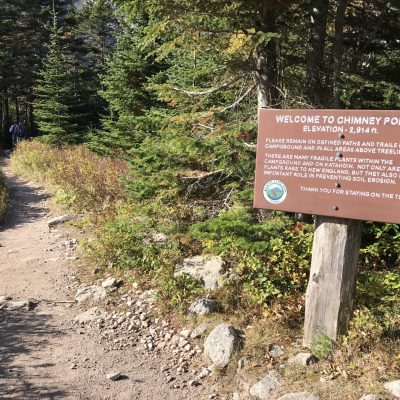 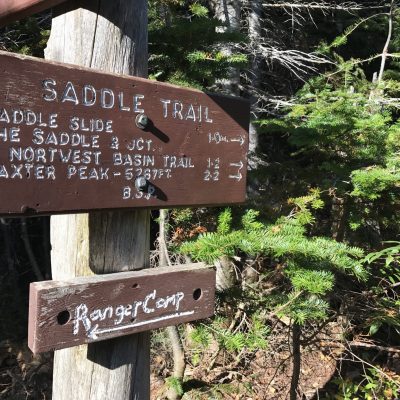 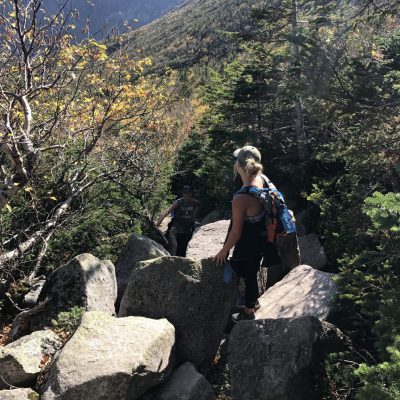 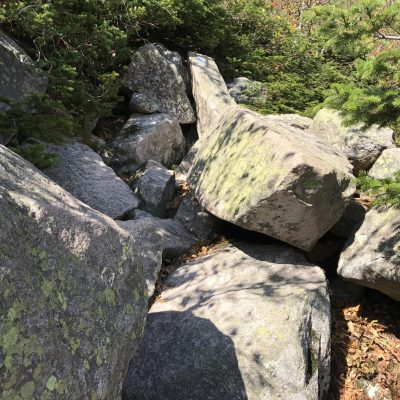 After a short break at Chimney Pond Campground, we signed their hiking register and took to the Saddle Trail, which we had been told was the easiest way up and down the 5,267-foot mountain. The saddle trail was marked as only 2.2 miles to Baxter peak, we had already done 3.3, so we were so thrilled to almost be there, more than halfway. Saddle started gradually to get steeper, but we were ok with a little challenge. Soon after we started, we were climbing over large rocks and pulling ourselves up. The heat was rising and we came across a beautiful stream at just the right time. We splashed our faces and pushed forward. When we were about two-thirds the way up, four us stopped and waited for the two others to catch up. We were so sure the end of this first 1.2-mile section was “just around the corner,” but boy oh boy were we wrong. Now the trail was above tree line and the boulders were bigger! We moved slowly, spreading out and taking bigger breaks. This was the longest part of the trail, for sure! When we got to the top of this rockslide trail, we realized it truly was just 1.2, not the 2.2 it felt like and we had 1 more mile to go!

A fellow hiker who had summited Katahdin before told us the last mile was a “cakewalk”. I would beg to differ. It started out much flatter than the first 1.2 of Saddle, but then there was lots of loose rhyolite that my feet slipped all around, making it very easy to sprain an ankle. Thankfully, we were all spared. The rock cairns were massive pieces of art, so well structured and beautiful to look at! We helped a man by sharing duck tape to repair his boot that was losing its sole and carried on. We made it halfway up the last mile and sat behind a large boulder until we got the energy to go on. As we rested, a young woman, likely in her 20s walked by us with sneakers, jeans and a sweatshirt on with no pack or water and a beautiful braid. She looked like she just walked out of her house, however she had just traveled across the Knifes Edge trail. We were perplexed, to say the least. The last half mile seemed to last forever as we passed the Cathedral trail, more rhyolite and lots of short vegetation. 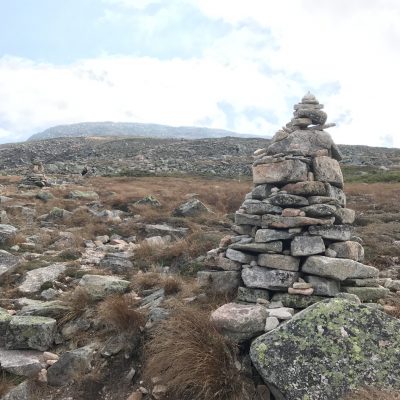 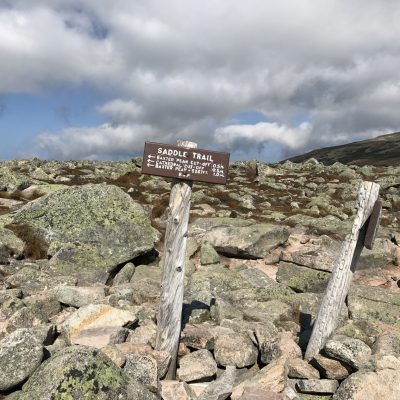 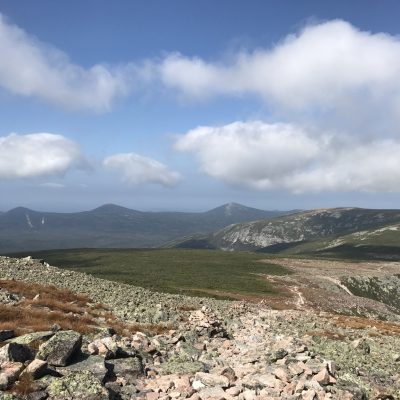 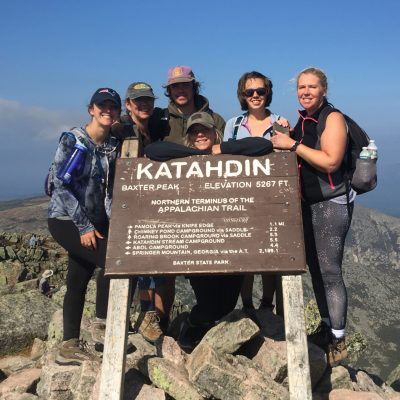 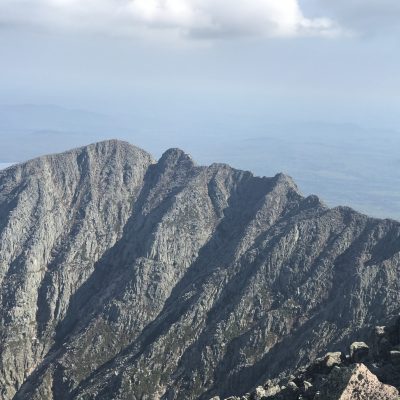 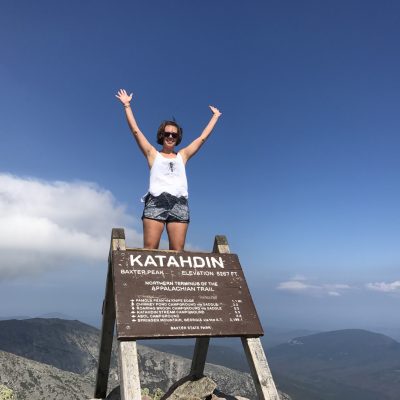 Finally, we came up a little higher and saw the summit with several other hikers posing with the iconic summit sign, thru-hikers celebrating the end of their 2,200-mile journey on the Appalachian Trail, day hikers raising a beer in celebration and lots of eating and resting. We took our photos, enjoyed some food and began our descent.

Shortly after we headed down, three of us needed to go to the bathroom, yet being above the tree line made for little to no privacy from the twenty or so people following us down the trail. We finally found some large boulders to squat behind and carried on. This moment made me chuckle since I have hiked many mountains yet never had the lack of privacy with dense forest surrounding me. The terrain was very different atop this mountain. We worked our way slowly down the loose rhyolite, until one of our hiker’s sole removed itself from her boot! Of course, most of our duck tape was used to help a different hiker, so she resorted to using the string she almost didn’t pack! We spread ourselves out even more as we descended down the Saddle Slide, very slowly and carefully. When we made it back to the stream, we filtered water using a Sawyer Mini to refill our empty bottles. We all brought more than the recommended amount of water, but still needed more! I am so grateful I brought the filter and will always carry it on future hikes.

When we made it to Chimney Pond, we all visited the perfectly placed and appreciated outhouses and hung out while waiting for the last two in our crew. It was 86°F! Sharing trail experiences with the other hikers was wonderful. It encouraged me to consider alternative routes on future hikes here! We found more duck tape for our friends now broke two boots and got her prepared to finish the last 3.3 miles, where she could them take them off for the last time. She was still carrying a large smile and began a sing-a-long as the six of us continued on. We hustled down Chimney, passing many exhausted hikers and going at a record speed. The first four of us made it to the Ranger Station at 5:45 PM and the last two just before 6:30 PM. We kicked off our boots, loaded into the cars and headed back to camp via Greenville.

Overall, I would say this is a fantastic mountain to hike! HIKE IT!! I loved the challenge and can’t wait to do it again! I do wish we camped the second night as we were all super exhausted by the time we made it back to Roaring Brook Campground. I also highly suggest talking to the rangers about the trails, because although we did lots of research ahead of time, we didn’t realize quite how different the trails were until we saw the 3D models of the mountain they had displayed at the ranger stations. Also, if you have backpacking gear, I think it would be super fun to hike the 3.3 miles into Chimney Pond Campground, camp out and hike the rest of the way the next day and camp again. I hope I get the chance to try this strategy out some time!